Oh my God! This is the first time ever that my Facebook feed has been dominated by a single topic. Nearly every post has got a picture of some chips and the message that Ellie Harrison is embarking on a project called The Glasgow Effect.

And I don't know enough to have an opinion yet... but I do know that every Glasgow hard-man of art is having a crack at her.

But I did an interview with Ellie before Christmas because the vile arts is always one step ahead. I am going to reprint her words here because, maybe, it will provide more information about who she is and what her work involves.

The Radical Renewable Art + Activism Fund (RRAAF) is a new and autonomous alternative funding scheme initiated by artistEllie Harrison and supported by 157 backers of a successful Kickstarter campaign (now the "RRAAF Founders"):rraafund.org/kickstarter

Once set up, RRAAF will use a wind turbine to generate energy to fund a ‘no strings attached’ grant scheme for art-activist projects in the UK.

The RRAAF project concept will be launched in Glasgow during December 2015 with a series of publicity stunts featuring the "RRAAF Mascot" – on Thursday 3rd outside Mono Cafe Bar as part of The Only Way is Ethics and on Thursday 10th outside the CCA Glasgow for ArtCOP Scotland.
These will culminate in this Launch Event at the CCA on Thursday 17th December 2015, 18:30 – 20:00. The event is FREE and open to all and will feature presentations and discussion by Ellie Harrison, Georgy Davis from Community Energy Scotlandand some of the RRAAF Founders, as they outline the plan for making the RRAAF project a reality in the coming years.

That was the project she was talking about. Now some words from her.

Since the start of the global financial crisis in 2008, my work has focussed on researching, exposing and challenging the workings of our economic system. This has led me to develop an expanded practice that now encompasses both art projects / performances (see Anti-Capitalist Aerobics and The Other Forecast), and direct political campaigning (see Bring Back British Rail, the campaign for the public ownership of our railways I have been running since 2009).In 2013-4, I took part in Campaign Lab - a nine-month ‘economic justice’ campaigning course coordinated by the New Economics Foundation in London. Since then, and in the wake of continued cuts to public funding for the arts, I have become interested in developing a new model for an alternative funding system, which offers a real working alternative, as well as a critique of the status quo: highlighting how current funding sources for art (from commercial sponsorship to state investment) can influence its content, sometimes to the detriment.And so the idea for the Radical Renewable Art + Activism Fund (RRAAF) was born! Once set up, RRAAF will use a wind turbine to generate renewable energy to fund a ‘no strings attached’ grant scheme for art-activist projects.In summer 2015, I started developing the RRAAF project identity with Glasgow-based designer Neil McGuire with the support of Beaconsfield Londonand CCA Glasgow, launching the RRAAF concept and Kickstarter in autumn - winter 2015, through a series of publicity stunts and public events in London and Glasgow as part of ArtCOP21, The Only Way is Ethics and ArtCOP Scotland.

These will culminate in the Launch Event at CCA Glasgow this 17 December 2015 (6:30pm), where I will present the outcomes of the scoping work funded through the Kickstarter together with Georgy Davis from Community Energy Scotland. 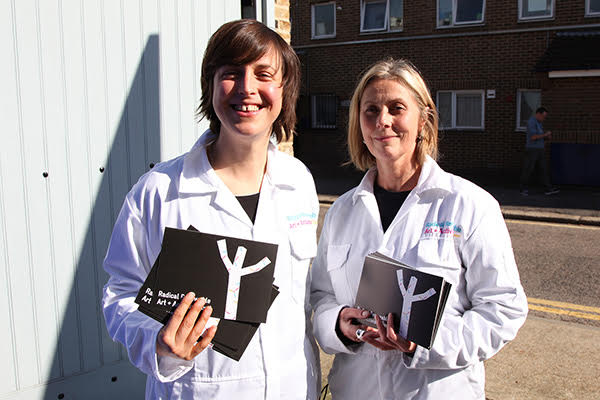 Loki, I'll be expecting a comment in couplets, please. Then we can have a rap battle or something.
Unknown at 14:11
Share